This poem serves as a glimpse inside the mind of young writer, Mary Rounds, nearly a year before writing her first book, The Ruins. Generally speaking, the collection of poems together creates a story set within a dark world created by a young girls depression. While the girl is lost within this world she is, unexpectedly, whisked away into a stunning romance that sends her spiraling head first into a chasm of self doubt. While she struggles to grasp at what is real and what her anxiety feeds her, she is thruster into multiple alternate realities, revealing her futures dark possibilities.

“I think this is what love is
Real love, true love”

These “alternate realities” come in the form of smaller collections and one short story which serves as a tribute to Edgar Allan Poe. The Nightmare Collection, The Castle of Lenore, and Why Luna Loves Daisies all have their own mini storylines which impact the overall plot significantly. Before the book The Ruins was written, Mary had been attending college away from home before she decided to leave and peruse her passion for writing on her own. “It was the beginning of a really dark time for me. I had all this really good stuff going for me, but the bottom line was that I wasn’t happy. I could feel the debt piling up around me and I felt like I was only in it because I thought it was just something I was supposed to do. But I wasn’t happy, I wasn’t writing and so I really thought about it a lot and the ultimately decided that school could wait”. 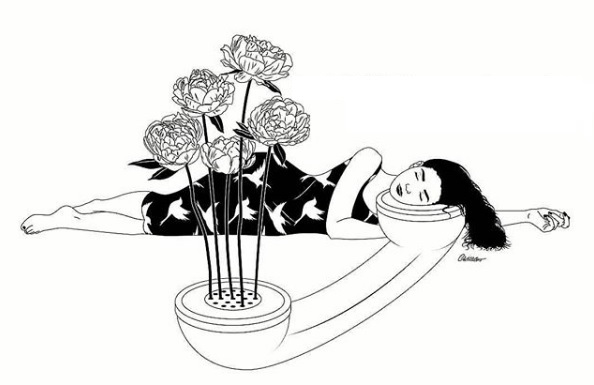 After leaving college she started working and for awhile she was writing casually, unsure of what direction she wanted to go in, until she stumbled on to the concept of The Ruins. “It was a really big moment for me. Not only because I had finally figured out what I wanted my first be to be about, but I had finally found the sense of direction and purpose I had been looking for since leaving school. I had already been writing a lot of poetry during that time, which used to be something I wasn’t into, but it served as a way for me to vent about my depression. So basically the whole time I was writing the book I was basically trying to write my way out of this really dark state of mind I was in. I had to figure out who I was as a person and reconnect with myself in order to really figure out who I wanted to be and what direction I wanted to go in life. I was trying to become more aware of myself while also dealing with my anxiety and depression which was and still is a challenge I deal with”

“I rage against the color white
Dressed in red prepared to fight
Mocking the lies that fill my head
Laughing at demons that wish me dead
Painting over art that portrays me, insane
Massacring thoughts that put me to shame”
-White, Lies

Currently Mary is putting a lot of time into her passion for music by writing lyrics and collaborating with various artists involved in both music and poetry. “I have high hopes in my future with music, but I’m not putting pressure on my work. I’m just focusing on being happy and writing as much as I an. As far as another book, I recently have been thinking of trying to release another collection at the end of this year or possibly early 2019, but nothing is certain as of yet”.